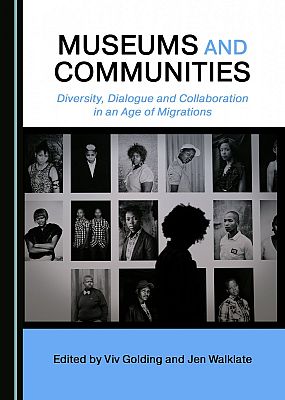 A Cambridge si parla di me

Il mio percorso performativo e artistico è stato fortemente influenzato dall’incontro con altre culture e dalle collaborazioni museali. A quanto pare, nel secondo caso, la cosa è reciproca…
Grazie a M.C.De Palma, antropologa e direttrice del Castello d’Albertis Museo delle Culture del mondo che in un suo articolo finito in questa preziosa raccolta cita la nostra collaborazione così:
“For the MWC Genoa, establishing a dialogue with the objects’ special resonance has recently culminated in hosting the performances of Federica Loredan, a dancer/performer/musician, who in 2017 decided to embody the condition of migrants and refugees dancing with a costume that produces sounds like the African masquerade costumes or the Mamuthones from Sardinia. Under the title Sirene/Mermaids, using a highly iconic musical genre like hip hop arranged in a personal mix with African rhythms, the costume reveals what is invisible and gives voice to the condition of those who get stranded, running from one nation to the other: the costume, the body percussion technique and the instruments played become vehicles of stories and changes, enabling the violation of cultural and geographical boundaries. In Loredan’s piece the body becomes a powerful object, with its keys and charms resounding like chains, incorporating invisible and magical forces. The performer, spit out from the sea, engages in a transformation that can be compared with the process producing the museum object, hosting memories and knowledge, in a struggle for survival, searching for the key leading to a safe shelter. This work results into comparable cathartic experiences for the dancer, the visitors and above all for the migrants invited on these special occasions. It demonstrates how this kind of collaboration can make museums special places that contribute to the wellbeing of the public, distancing themselves more and more from the traditional stereotyped image of the museum of the past that relegated them into austere sites of silence, which generated fatigue and an inferiority complex (Golding and Modest 2013). “

This website uses cookies to improve your experience while you navigate through the website. Out of these, the cookies that are categorized as necessary are stored on your browser as they are essential for the working of basic functionalities of the website. We also use third-party cookies that help us analyze and understand how you use this website. These cookies will be stored in your browser only with your consent. You also have the option to opt-out of these cookies. But opting out of some of these cookies may affect your browsing experience.
Necessary Sempre abilitato
Necessary cookies are absolutely essential for the website to function properly. These cookies ensure basic functionalities and security features of the website, anonymously.
Functional
Functional cookies help to perform certain functionalities like sharing the content of the website on social media platforms, collect feedbacks, and other third-party features.
Performance
Performance cookies are used to understand and analyze the key performance indexes of the website which helps in delivering a better user experience for the visitors.
Analytics
Analytical cookies are used to understand how visitors interact with the website. These cookies help provide information on metrics the number of visitors, bounce rate, traffic source, etc.
Advertisement
Advertisement cookies are used to provide visitors with relevant ads and marketing campaigns. These cookies track visitors across websites and collect information to provide customized ads.
Others
Other uncategorized cookies are those that are being analyzed and have not been classified into a category as yet.
ACCETTA E SALVA
Powered by